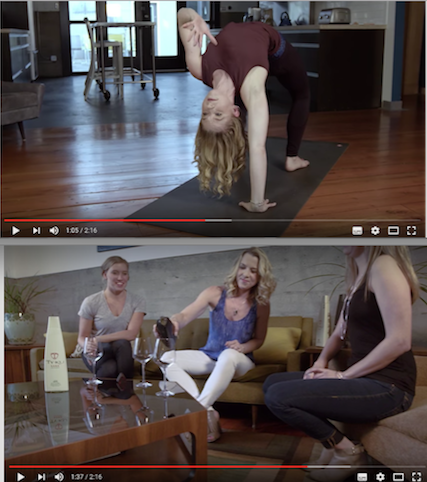 Yoga and alcohol. It’s a bit of a laugh, isn’t it? I mean, who doesn’t love a glass of something fruity after class?

Disclosure – I’m not teetotal. Weekends are super-exciting at our place.  Monday to Friday you’ll find us eating macaroni cheese with the kids and chatting about Minecraft, basketball scores and what other kids have in their lunchboxes. But at weekends, we pack the children off to bed, enjoy some grown up food and indulge in a glass of red wine. We’ve occasionally been known to get through an entire bottle between the two of us over the course of a long weekend. So I’m no wowser.

But I don’t pretend that quaffing wine is part of a healthy, balanced lifestyle. I do all sorts of things that don’t reflect my highest values, like shouting at my kids, eating rum and raisin chocolate and using the local rat-run before the 7.45am curfew is lifted. Nobody’s perfect.

While rum and raisin chocolate isn’t exactly a superfood, alcohol is a whole different ballgame. If you’ve ever worked with, or loved, people who are recovering from alcohol addiction, you’ll understand the damage it can do to people’s health, relationships and lives. And then there are the families of people affected by alcohol dependency. Domestic violence refuges are full of them.

Alcohol related problems cost the Australian economy an estimated $14.3 billion each year.* A recent UK study showed that 60% of alcohol sales are ‘either to those who are risking their health, or those – labeled harmful drinkers– who are doing themselves potentially lethal damage.’** So much for the responsible service of alcohol. It’s worth bearing in mind that revenues for liquor companies in Australia are around $10bn per year and growing.***

What’s all this got to do with yoga? Plenty. Yoga is all about disrupting old patterns of thinking and behaving and many yogis find that with a regular practice, behaviours such as unhealthy drinking habits are reduced. Yoga has been successfully incorporated into drug and alcohol programs and organizations such as Y12SR use the techniques and philosophy of yoga to help people overcome addiction.

But yoga in the west is no longer about recognizing and detaching from harmful behaviours, or being aware of the thought patterns that cause us suffering. Yoga has become both a commodity in itself and a marketing vehicle for other consumer products. I’ve written before about how yoga is marketed to women in the same way as fashion and cosmetics. But this week, yoga advertising reached a new low.

Yoga Journal USA and a high profile yoga school owner collaborated to sell not only the dream of an unrealistic yoga lifestyle (yes, another thin, young, white woman bending her body in impossible ways, complete with glamour model photo-shoot) but to flog a brand of booze as if it was a health product. Are Yoga Journal and the teacher involved aware of the influence they have over their followers (mostly young women)? Of course they are – why else would an alcohol brand spend good money to have them to promote their product?

There are two issues here. One is the damaging effects of alcohol (see above). The other is the way in which the commodification of yoga has changed the behaviours of ‘leaders’ in the yoga community. When I posted the offending Yoga Journal advert on social media, one of my friends commented “It’s the system. This is what yoga teachers have to do to survive.” Actually, I’ve paraphrased her. Because Yoga Journal deleted the video from social media and all traces of the discussion we’d been having about it evaporated. But coming back to the point.

That comment really got to me. Really? Using yoga to sell booze is the new normal? Here was my reply:

“The reason many turn to yoga is because their souls have been sucked out of their a**holes by consumer capitalism. When yoga becomes just another channel for selling products that not only harm us physically but contribute to the social and psychological manipulation that creates the conditions for addiction, yoga becomes part of the problem. When yoga teachers and publications tell people to buy s**t they don't need in order to feel good about themselves, we are contradicting what we teach on the mat. Yes, it's the system. But if we can't survive without endorsing and perpetuating the system we seek to change, we need to find new ways to survive. Or rethink what surviving means. Surviving is what people in Syria are doing. What we're doing is selling s**t nobody needs in order to support unsustainable lives.”

Which kind of nails how I feel about the whole thing. There’s clearly been a social media backlash against the Yoga Journal booze ad, but I wonder if that’s just a blip on the landscape. The yoga industry in the west seems hell-bent on superimposing the values of consumer capitalism onto the practice of yoga and repackaging it as a way of supporting, rather than disrupting, the beliefs and behaviours that cause our suffering. But then, on the same evening I found the Yoga Journal Booze advert, I also found this. Perhaps there’s hope yet.